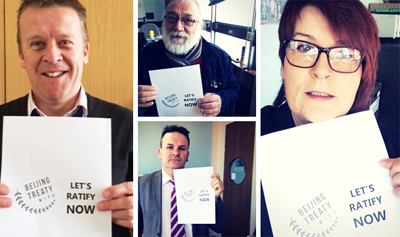 The World Intellectual Property Organisation (WIPO) Beijing Treaty on Audiovisual Performances (BTAP) is a multilateral treaty acknowledging for the first time the intellectual property rights of performers with regard to their audiovisual performances. Adopted in 2012, it is a landmark achievement and one that officially ends a discrimination dating from the early 60’s and resulting, until recently, in the sole protection of audio performances in most countries around the world.

WIPO is a specialised UN agency, based in Geneva. It is an inter-governmental organization focusing exclusively on intellectual property, including copyright and neighbouring rights. Member States regularly meet at WIPO to develop new international norms that contribute to the harmonisation of laws and regulations in this field around the world. Website: http://www.wipo.int/portal/en/index.html

As a non-governmental organisation enjoying observer status at WIPO, FIA played an essential role – together with other performer organisations – in building bridges among governments and encouraging a consensual approach to the protection of audiovisual performances. The BTAP finally brings justice to the claim that all performances deserve intellectual property protection, regardless of how they are delivered to the audience and the nature (audio or audiovisual) of their fixation. Consistent with another WIPO treaty in 1996 that focused on audio recordings, the BTAP grants audiovisual performers moral and economic rights, including for online exploitation, whilst also departing from previous practice on several counts.

What is the history behind this treaty and why was it only concluded in 2012?
This treaty is the outcome of a lengthy process, encompassing two previously missed opportunities. The first international treaty to protect the intellectual property rights of all performances was the 1961 Rome Convention for the Protection of Performers, Producers of Phonograms and Broadcasting organisations. While breaking new ground, it provided limited protection to performers and no moral rights. In addition, one of its provisions expressly denied any economic right to audiovisual fixations. 1961 was therefore the beginning of a long discrimination between the intellectual property protection of audio and audiovisual recordings at an international level that was only mended by the BTAP in 2012.

A WIPO Diplomatic Conference in 1996 would finally update the protection in the Rome Convention and upscale the IP rights of audio performers only. Another Diplomatic Conference in 2000 specifically to deal with audiovisual performances reached a provisional agreement on 19 substantive articles but failed to deliver a treaty as diverging opinions on the sensitive issue of the transfer of performers’ rights to producers could not be reconciled. Indeed, finding an acceptable compromise on this matter was the main reason it took so long to finalise an audiovisual performances treaty. The rights of performers in audio-visual works are in fact managed differently in various legal systems and, while the producers’ lobby insisted on a mandatory presumption of transfer rule, an overwhelming majority of countries resisted that idea. It took another 12 years for producers to finally accept a provision that, while acknowledging presumption of transfer provisions in national laws, it does not make those the global rule in audiovisual production contracts between performers and producers.

What is the difference between the BTAP and previous WIPO treaties?
The main difference between the BTAP and the 1961 Rome Convention is that, while the latter only awarded performers the right to oppose certain uses of their performances, the former grants them a comprehensive list of exclusive rights, including the right of making available on demand, which has become essential in light of the latest technological developments and the digital distribution of creative works. The BTAP also awards audiovisual performers moral rights, which were not included in the Rome Convention. By far the most striking difference however is the fact that the BTAP specifically protects audio-visual fixations while the Rome Convention did not.

The WIPO Phonograms and Performances Treaty (WPPT), which was approved in 1996 and entered into force in 2002, is more closely related to the BTAP. However, as the name tells, it only awards IP rights to audio recordings. The catalogue of economic and moral rights is quite similar, although occasional differences exist as to the extent of the protection granted by those provisions and the options that countries may take as they ratify and implement the treaty. Differences also exist with regard to the application of the treaty provisions in time. The most striking difference between the two treaties, however, is certainly the inclusion of a specific provision recognising the legitimacy of various mechanisms at national level regarding the transfer of the exclusive economic rights in the treaty to the producer. This simply does not exist in the WPPT.